Word of the Day -- Piedmont

I'm not sure there is anything prettier than a:

Piedmont -- A gentle slope leading from the base of mountains to a region of flat land.

The word is Italian in origin, something like the 18th century.  If you break the word down, you get mountain foot.  Just a pretty word for a pretty place.

I'm partial to the ocean and the mountains; I'm not really a flatlander kind of guy.  Quick side story: When I was in my 20's I was living in Boston and I took a drive one day to get out of the city.  Ended up in St. Johnsbury, Vermont at a bar called Grandpa's Cigar, or something close to that.  It was a nice little place, filled with smoke and people.  I was sitting there in the afternoon having a beer when a guy sitting next to me struck up a conversation, as people will do in bars.  He asked where I was from and I said Boston now, but was born in Arkansas.  And he said: "Oh, you are a f***ing flatlander twice over now, aren't you?" He didn't say it in a mean way, but it was the first time I heard the word flatlander, but it stuck with me.  Some words just do I suppose.

So as I said, I'm not much for flat.  And those rolling hills near mountains are just plain gorgeous.  Check out this picture I got from the Word Genius site (also where I grabbed the definition).  This reminds me of the hills in southern Virginia.  One of my brothers lives in Virginia and each time I pass through there, I think its one of the prettiest places I've seen. 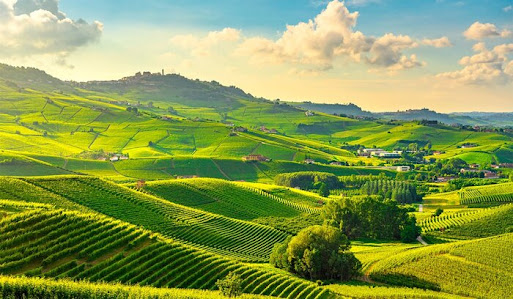