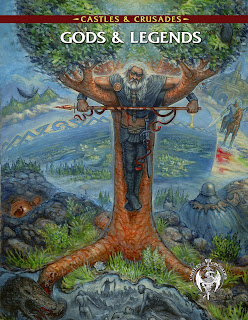 Though the gods dwell beyond the confines of the world, they are drawn to it. Too often they see to force their will upon the realms of mortals. Channeling this divine will lies upon the shoulders of the cleric and paladin, the skald and druid. They turn to the gods through prayer, ritual, sacrifice, and devotion, all in hopes of bringing that power into and through themselves, to unleash it upon the world at large.

Castles & Crusades Gods and Legends, (get yours in print, PDF or the print/pdf bundle) brings to life hundreds of deities for both your characters and monsters; dwarves, elves, gnomes, orcs, gnolls, and more besides. Each deity comes complete with the information you will need from when to sacrifice to what kinds of temples they prefer. It also includes short stats for the gods of the Celts, ancient Germans, Norse, Romans and Greeks, Egyptians, and the Slavic Gods.

More than that, Gods and Legends comes with guidelines on how to run deities and the characters that worship them.

What Lies Within Gods & Legends

Gods & Legends consists of three main parts: The Anvil of the Gods (a how-to section), Humanoid Pantheons (from humans to dwarfs to orcs), and real-world mythologies.

Anvil of the Gods

Pantheon of Beliefs: In the first part of Gods & Legends you find a host of guidelines and suggestions for running deities in your campaign. Beginning with Deities in a Role Playing Game we explore the role of deities at the table, both for divine-based characters and the mundane fighter and rogue. The section covers role playing the deities themselves, the how and why, struggles with the deities, and a short description of the powers they all possess.

Gifts and Boons, the Holy Gift: Here we explore the roles of various classes in the deity/character relation: clerics, paladins, and druids.

Gods and Avatars: The abilities of gods transcend most characters, but it is always possible to use the god’s avatar, whether your games are high level or low. Learn how to use them no matter what your campaign.

Healing and Holy Symbols: These sections delve into one of the major aspects of character play and how it relates to the gods.

Gods & Legends delves into a host of pantheons, all ready for immediate deployment to your game tables! They include the following: 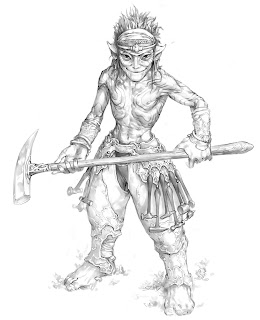 Here we step lightly into the real world and plug in the stat blocks for Celtic, Egyptian, Germanic, Norse, and Slavic deities. Each entry exists as a stat block of the necessary information, as these are covered in far greater detail in the Mythos books. We sell the Mythos as a bundle or individually! 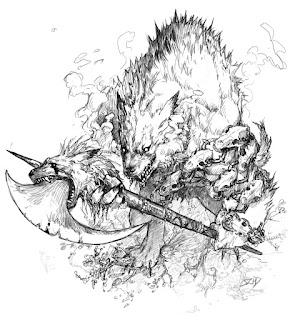