Morning Myth - the Shamans of Siberia

Posted by Davis on October 21, 2021
This myth/story/truth comes from Siberia. The people to which I draw this from are/were shamanistic.

Several things all the peoples have in common is that the world tree connects all the realms, earth is the middle realm or realm of man, and shamans are the only who are able to climb up and down the world tree. Often times they can only do so when changing into an animal, though this is not necessary.

Shamans travel to and from realms to learn, fight, and gain magical powers. There are few really cool stories from Siberian myth I will relate over the coming days. 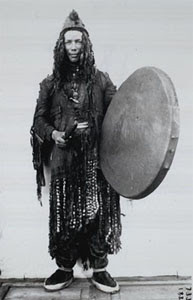 "One Siberian myth tells of a hero who followed a golden bird up the World Tree. The bird changed into many shapes, finally becoming a woman, whom the hero wished to marry. First, however, he had to destroy an extra sun and moon that were making the world too hot and too cold. For help, the hero turned to a sea god, who boiled the hero in an iron kettle and then shaped the fragments into a new man of iron, armed with iron weapons. The hero used these to shoot the extra sun and moon."
Read more: http://www.mythencyclopedia.com/Sa-Sp/Siberian-Mythology.html#ixzz79vYKQgis

Mark Spencer said…
This is a really decent site post. Not very numerous individuals would really, the way you simply did. I am truly inspired that there is such a great amount of data about this subject has been revealed and you've put forth a valiant effort with so much class. On the off chance management assignment help that needed to know more about green smoke surveys, then by all methods come in and check our stuff.

Ethan Henry said…
I really appreciate the way you people woocommerce development my plugin. Thanks!
11:33 PM

Mark Spencer said…
Thanks for such wonderful blog that looks pretty different, I would suggest you please make a proper plan for your blog and start professional blogging as a career, One day you would be smart enough to earn some money, best dissertation writing wishing you a best of luck my friend, Thanks a lot for your nice support and love.