As Luck Would Have It

Davis has had a long run of bad luck. Just keep that in mind.

So those who know me, know I don't care too much for stuff. Those random things that pile up over time, filling  desk drawers, dressers, baskets in the bathroom closets, piled up in little decorative boxes, in trunks and so forth and so on. It's just the flotsam of a life lived, perhaps well, perhaps poorly. Few of the items have much meaning, though over time we assign them meaning because they had the courage to remain in the drawer, the basket or the trunk. And after time, the items in question develop a personality, become living things in our mind so that tossing them out becomes ever harder.

This all leads to one final, inevitable conclusion. Someone else has to clean it up. That someone else has been me on multiple occasions. This has, in turn, led me to attempting (and often failing) to cleanse the flotsam from my own life.

As much for me as those who come after.

Today, in an attempt to get a pen out of my  center desk drawer to make some notes for the CKG promo video, it caught on something else, a something else that was in turn under a small tray of pens. The one action caused a chain reaction and upturned the tray of pens. That was irritating and I should have taken it for the sign it was. But I did not.

A moment later, while filing some papers, the overflowing file cabinet would not take them. This was a second sign. This one led to a sudden and violent cleansing of the file cabinet into the burn pile. (I'm not sure what I burned, it was alot of paper, but it doesn't matter now, because it is gone).

At any rate, that in turn led to me plunging into the desk and cleaning it out as well. Quite a few things found their way into the garbage and others to whatever other home will hold them until I trip over them in the future. But in the midst of all that I found a rock.

That rock has been with me for over a decade. It has sat in that desk drawer for year after year. With no knowledge of where it came from, why I had it, or even how it got there I just kept it. Some faint memory told me of a one time paper weight, but I couldn't really remember. The rock had seemingly earned its place by the sheer amount of time it spent there. It was part of the family.

Well. No more. The rock had to go. It was just a rock. It hit the desk top, ready to find its way, with one good chunk, into the wood beyond the fence post.

I was talking to Davis, my brother, via skype, while this was going on and he was laughing at me and I mentioned this rock to him. He said "what rock?" I told him I had no idea how I got it. But it was going. I sent him a picture. 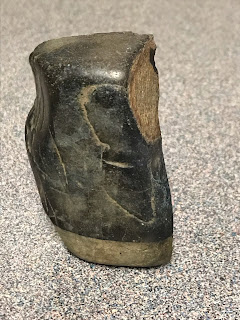 His response was overwhelming! Let me show you... 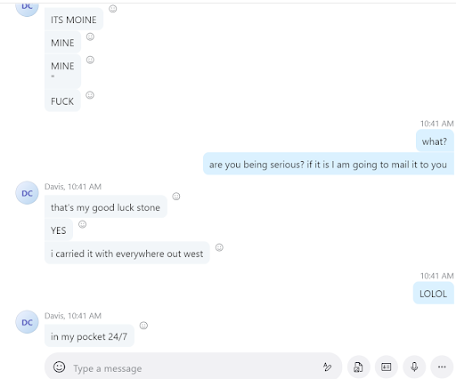 He went on about it for awhile. He also texted me. Davis NEVER texts me. I could tell him he won the lottery, and if it were on text, he would not respond. The only persons I know that he responds to on text are his children, my wife and my daughter and that's it. I'm not sure why I don't make the cut, but suspect it has something to do with my never ending blather about how we need to work harder.

At any rate, the rock did not go hurling off and into the forest. It is here. On my desk, waiting to be shipped or carefully driven to his farm some 3 hours away. I'm afraid if I ship it, since he doesn't have his good luck rock, it will become lost in the mail.

As luck would have it, he'll get his rock back one way or another.

Hopefully, he'll have a turn of good luck after this. And hopefully he will finish the product videos he's been working on so we can sell more CKGs! (The first of his videos is up for Starship Warden.)

And now he has me looking for a jade necklace carved for him in Hondurus....lord have mercy.

For those who don't know, Davis Chenault is my brother, together with Mac Golden we founded Troll Lord Games in 1999 and he and Mac created the Siege Engine that powers the RPG Castles & Crusades.