Word of the Day -- Picadillo

Okay, I'll admit that yesterday's word made me think of this word.  The sound is quite similar but the derivations and meanings quite different. Today's word is:

Picadillo -- a spicy Latin-American hash or stew of meat and vegetables often with raisins and olives that is commonly used as a filling (as for tacos) or served with rice and beans.

A far cry some peccadillo, unless of course you are planning to committing a misdemeanor with a spicy hash... picadillo came about as a word in the late 1800's and is American Spanish, from Spanish, stew of chopped meat, from picado, past participle of picar to prick, chop, from (assumed) Vulgar Latin piccare.

Oddly enough, right after choosing peccadillo as the word of the day, I saw picadillo used in a YT video, someone making a vegetable picadillo.  It's odd how words just show up.  There's a word for that, but it's name escapes me at the moment.  Maybe that will be a word of the day if I can ever remember what that is called... 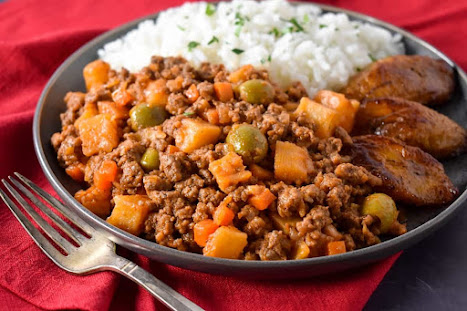