Word of the Day -- Calumet

Came across this one in one of the puzzles this morning.  Had no idea on it.   Usually I can at least guess at a word, either because I've seen or heard it, or can suss out something about its derivation.  But honestly, I was totally stymied:

Calumet -- a highly ornamented ceremonial pipe of the American Indians.

The calumet has long been an important component of the ceremonies of Native American groups, but the first inhabitants of the Americas did not give the venerated pipe (also known as the "peace pipe") that name. English speakers borrowed "calumet" from American French, which had carried it from the dialects of France to North America. "Chalumet," the French ancestor of "calumet," traces to the Latin calamus and the Greek kalamos, both of which mean "reed" or "pen." French baron Louis-Armand de Lom d'Arce La Hontan, who explored North America in the 17th century, noted that French speakers had applied "calumet" to the highly ornamented clay pipes of Native Americans by the 1670s; English speakers followed suit before the turn of that century. (merriam-webster) 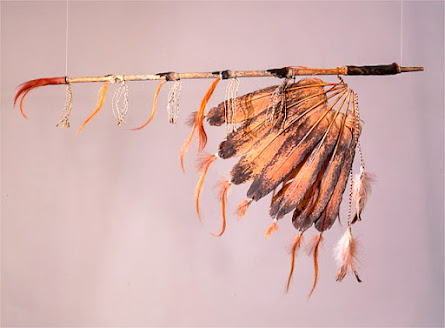