Stephen got a little irate with me and my lengthy, of trail, meanderings in my modules. He challenged me to write a one room dungeon/area encounter in less than 1000 words.

Challenge accepted! Woops already at 12 rooms. Stop couldn’t do it. So I did write an adventure. LOL

Level as you choose. Its a lot of roleplay and leads up to the characters getting involved in city problems and many adventures.

The House on Bilger Hill

Overview: Much of the city of Weltering is abandoned. Ruins, crumbled buildings, and lonely statues act as monuments and edifices to the city’s past glory. Peasants, masons, and others have dismantled these structures over the centuries, reusing the materials to build newer abodes nearer that portion of Weltering which is still occupied. Now this dismantling is all under the control of the Stonzer Guild.

Mission: Barish the Stint, a friend of one of the characters and a Stonzer, asks if the characters might try and catch some thieves. He explains that a building the Stonzer’s have been dismantling has had some stone stolen from its collection yard. The stone has been taken under cover of darkness. Two nights previous to Barish asking the characters to investigate, the two guards who were left there were both found passed out and tied up in a nearby quarry. No one was left to guard since then and the Stonzer are offering a reward for the capture of the thieves. Barish does not tell anyone at the worksite and ask the characters to arrive just before sunset.

The Backdrop: Celine Megalin is the matriarch of a family that can stretch its heritage back eight hundred years. Times have not been good for the family and, though the family holds titles of prestige, they have little money or property. Celine is a very proud person and her family name is important to her – it’s really all that’s left. When perusing the markets, Celine noticed a large slab of marble for sale. It had her family crest on it.

Celine had her house guard, Karl, make contacts to find out where the slabs came from. Once she discovered the Stonzer’s were tearing down another building, she discovered that the structure once belonged to her family. Since she could not afford to pay for the slabs, she had Karl hire some people to go and take the lintels from the building. 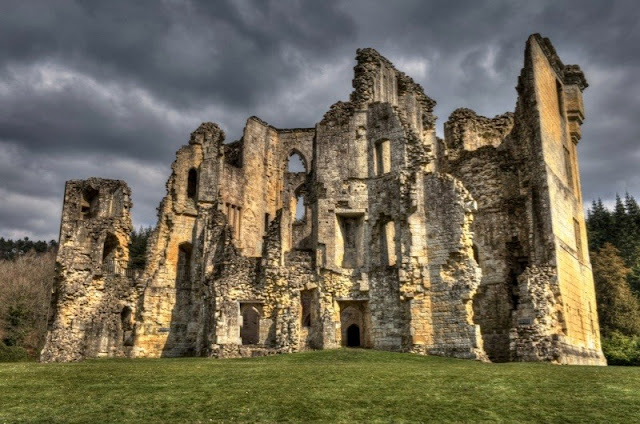 Karl hired two thugs to do the job. For several nights the thugs grabbed what they could but it was not the correct material. The thugs then hired some masons to get exactly what they wanted. In the meantime, guards were left at the worksite one night. The thugs paid a drover who delivers beer to the worksite to spike the beer with a narcotic before his nightly delivery. After the guards were asleep, the guards were tied up and the masons went to work taking some marble slabs and sawing of one slab on an interior wall. They two thugs are coming back with four masons to get the job done. It may take a few days after the characters are asked to do the for these six to show up.

The House: Nothing but the exterior stone walls, interior walls, and a few staircases remain of the building on Bilger Hill. Scaffolding stretches one hundred feet above the ground along one wall where the work of dismantling has begun in earnest. The scaffolding consists of six layers with wooden chutes stretching from the uppermost layer to the ground. These are used for conveying stones from above to below. The scaffolding is ascended by thee ladders.

Tools are arranged nearby the scaffolding. There are hammers, chisels, shovels, pulleys, rope, wheelbarrows, pry-bars, mallets, bags, leather satchels, and wood planks of various sizes. Several workbenches are arranged under an awning nearby the tools. Stone, hammers and chisels are on the tables and on the ground. Leather hides and wool blankets are folded and stacked by the tables. A campfire with several pots nearby is in the center of the structure. Wooden bowls and spoons are scattered around the pit. Four large casks sit on stands close by the fire pit.

There are three things of note if the party searches the encampment. One of the barrels has been emptied recently. The ground beneath it is still wet and smells of beer. This barrel of beer had the narcotics in it. The beer delivery person emptied it the following morning. If a sample from the barrel is taken to an apothecary, the narcotic can be identified. It is readily available nearly anywhere. The other barrels have a water and wine mixture inside.

There is one rope that appears about of place, though no one has noticed. The rope hangs from the wall opposite the scaffolding. If anyone takes the time to look, it is held in place by a grappling hook. If anyone takes the time to climb the rope and look, laying on top of the column is a rock saw, hammer and chisel. The column is part of nine arches. A marble slab on this column has been partially sawed off. Looking down the wall, the character may notice eight other time-worn, weather scoured, lichen covered marble slabs with crests on them. 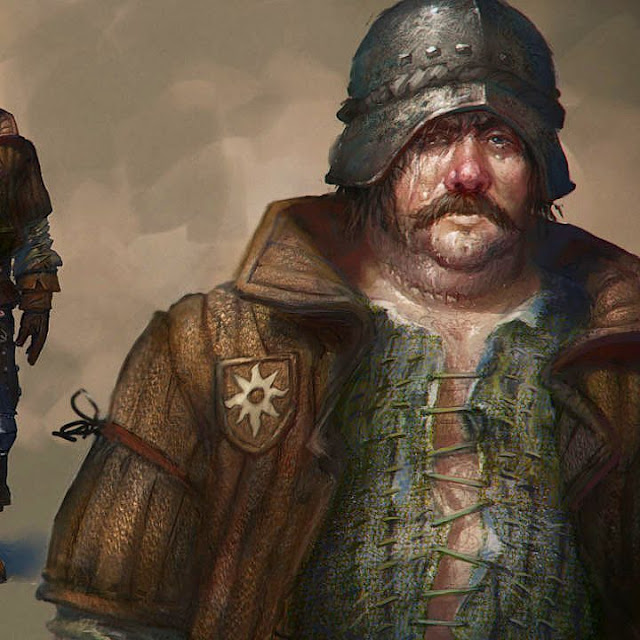 If the characters can correctly convey the image on the crest to someone who knows a lot about crests in Weltering, the crest can be identified as belonging to the Megalin Family. Outside of the lord’s retinue there are only a few people who could identify the crest and it may take several days to track down the correct individual. There is a scrivener on Alloak Road, Hamslig Stuhl, who specializes in making invitations for the elites. The other is a priest, Patrick Duffy, whose temple keeps copious records of family trees and crests. Neither offer their service for free.

There are eighteen lintels, nine on each side of the interior wall of the ruins. Each is intact. Six were removed and sold by the Stonzer’s Guild at the market. One is partially removed. If the thugs and the masons can work all night unmolested, they are able to remove all of them in one night. Karl shows up early in the morning after the thieves arrive with three donkeys to carry the lintels back to Celine.

Ending: The characters have many options over the course of the night. The thugs may fight a little, but not for long, they are not willing to die for some rock. The masons only fight if absolutely necessary and flee are agree to leave. Karl, if encountered acts like nothing has happened. Karl also happens to have a cousin who is a captain of the city guard and offers to ‘take care of the situation’ for the characters if encountered. If the characters trace the whole situation back to Celine, she offers compensation for their trouble and suggests people of their nature are needed in Weltering. She has a friend who needs a ‘job’ done.