Training in Castles and Crusades

I don’t think we have training rules in Castles and Crusades. I can’t check either because my internet is down and the only copy of a Castle Keeper’s Guide I have handy is on the Troll Lord Games server. So, yeah. I should probably remedy that. I probably will not. In any respect, I was listening to a podcast the other day. An ex-Delta team member was speaking to his days of training and learning to become a better combatant. I noted a few things.

First a little summery of one portion of the commentary. The guy had just graduated from his year of training with the SEALs. He and six others, all in their early 20s were sent for yet another training exercise for hand-to-hand combat. An ‘elder’ SEAL, in his mid-40s faced them off. The goal was a knife fight. The older SEAL member beat each and every one of the younger SEALs in under 1 minute each, taking each to the ground before delivering the killing blow. The older SEAL team member had real life combat experience as well as a lot more training. The real-world experiences are what set him apart.

The point the SEAL member made afterword was very interesting and played into a theory of mine. Training can only take a person so far. Real life experiences or application of the training are where the most significant advances in one’s skills are made. US Army records in WWII and Vietnam also reveal the same thing. Even though training attempts to replicate real world combat, it can’t. I guess that’s where the rubber meets the road. On the other hand, the SEAL team member said that continual training, refinements, and reapplication of what was learned in real world situations was even better. It is the combination of the two that creates true expertise. 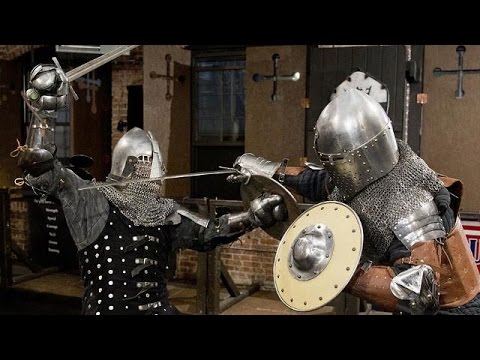 As was the case during the age when swordcraft was widely practiced. Continual training was par for the course for knights and soldiers. This is especially true of standing armies like those Rome or the Persians employed. Most knights went through six years of training and combat before being knighted. Sir William Marshal is said to have trained well nigh unto his death. At seventy he was still fighting trim and constantly trained. There were even academies of the marshal arts found throughout Europe where those who could afford the training, would pay handsomely.

Training plays no real role in many games. Primarily, I think, because it would be boring and consumptive of in-game time (a constant non-issue for me and me alone apparently). I do think training can be used in the game. A simple solution that could hasten level advancement without effecting much of anything is that a character could train up to ½ the experience needed attain the next level. The caveat being the last ¼ experience need to attain level would have to be while adventuring. Costs and time could vary and would need to be worked out.

The training would open a whole new venue of opportunities for the person running the game to create different adventures, sorta slurp up extra coinage the characters may have laying around, and have the characters meet new non-player characters. Sometimes finding the famous thief, swordmastrer or magician to train under could be an adventure. I think this could be easily incorporated into a game and might be something Castle Keepers should be open to. I used to use it all the time but quit several decades ago for some reason. I think it high time I bring it back.

Sparky said…
In various adventures, CnC or otherwise, there is always that grizzled veteran hanging around some village, the guy who's seen and done a thing or two. It makes sense that some might be willing to share their experience & wisdom, maybe for a price, maybe because they took pity on the party member.

In the PC game, Kingdom Come: Deliverance, its a pretty authentic depiction of the medieval era, and the combat requires a lot of experience before you're actually good at it. But there are those individuals you meet in your travels you can train with. Maybe they teach you new moves, maybe thru sparring you get just a little bit better. Having the ability to do that in game would be interesting.

If you're using the advantages system from the CKG, I could definitely see learning some of those that way. You meet a veteran fighter, and for X amount of gold, and X amount of game time, he can teach you this ability.

I do like the idea of hastening XP progression to a degree. You invest in game time/coin to advance a given amount.. And if you're a CK who's campaign encourages players to have a stable of characters, they could have one character in training for X amount of weeks, while they run a different character. Make the training cost have real weight to it, not just coin. Not being able to use that character for a few sessions would carry real weight to it imo.

Might be interesting to incorporate a battle at the end. "Show me what you've learned." Cue battle, not so much fun for other party members, but the CK and Trainee will have a good time of it. And maybe if he bests the mentor, or meets some certain goal, he gets an XP bonus from it.

I'm spitballing now. I think there are a lot of simple ways to execute training in a game though.
3:21 AM

Davis said…
no no that's excellent, i've got an outline, now i have to cut it down to about 300 words and get the core idea out.l.. I really like the advantages idea. that's a nice touch.
6:51 AM

Mike Saxton said…
I love this idea. I am 2 sessions in to my new C&C campaign and I have yet to figure out how I want to handle training. I always liked training to advance levels. Will be watching to see what you come up with.
9:05 AM