Word of the Day -- Serabi

Serabi, surabi or called srabi is an Indonesian pancake that is made from rice flour with coconut milk or just plain shredded coconut as an emulsifier. Most of traditional serabi tastes sweet, as the pancake usually eaten with kinca or thick golden-brownish colored coconut sugar syrup. However another savory version also existed that uses oncom toppings. Each province in Indonesia has various serabi recipes corresponding to local tastes.

Serabi is a traditional cake that seems to originate from Java.

The most basic traditional serabi only employs batter made from the mixture of rice flour, coconut milk and coconut sugar, cooked upon small earthenware frying pan on charcoal fire. Sometimes pandan leaves juice might be added into this batter mixture to add aroma as well as greenish color. During the cooking process, sometimes toppings are added upon the batter.

Both the cities of Bandung and Solo are famous for their version of serabi. Bandung surabi is dryer and firmer with pancake-like consistency, and today are well known for their rich variant of toppings, most are recently developed fusion recipes. The serabi from Solo however, are more traditional with a little bit half cooked with thin crispy crust and watery center with rich coconut milk taste. Famous serabi variant from Solo is called serabi notosuman. 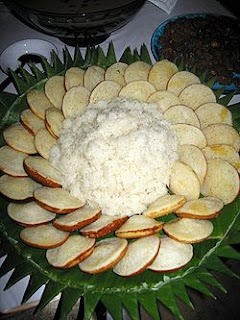