Word of the Day -- Machicolation

A machicolation is a floor opening between the supporting corbels of a battlement, through which stones, or other objects, could be dropped on attackers at the base of a defensive wall. The design was adopted in the Middle Ages in Europe when Norman crusaders returned from the Holy Land. A machicolated battlement projects outwards from the supporting wall in order to facilitate this. A hoarding is a similar structure made of wood, usually temporarily constructed in the event of a siege. Advantages of machicolations over wooden hoardings include the greater strength and fire resistance of stone.

The word derives from the Old French word machecol, mentioned in Medieval Latin as machecollum and ultimately from Old French macher 'crush', 'wound' and col 'neck'. Machicolate is only recorded in the 18th century in English, but a verb machicollāre is attested in Anglo-Latin.  The Spanish word denoting this structure, matacán, is similarly composed from "matar canes" meaning roughly "killing dogs", the latter being a reference to infidels.

Machicolations were more common in French castles than English, where they were usually restricted to the gateway, as in the 13th-century Conwy Castle.

One of the first examples of machicolation that still exists in France is Chateau de Farcheville built in 1291 outside of Paris. 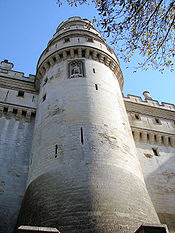