Off to Fort Davis and Texas Pt 1

Be sure to read part 2 Dry Sands, Industry and the Road to Old Mexico and 3, From Old Mexico to Heaven's Dust and Back Again, below.

This is the second of hopefully three long drives I’ll take this Summer. My wife, youngest son and I are all headed to the McDonald Observatory to have a gander at some galaxies far far away. It will be a quick trip, day out, day there, day or two back again. 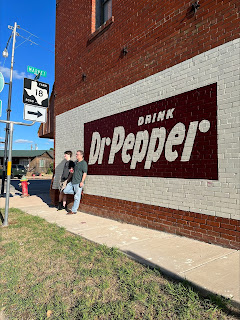 We loaded up and set out on the 12-hour journey to the Observatory about 10 am Friday morning. We had no real destination for the day, just driving until we got tired and found a place to rest. We hoped for 8 hours at least.

Beginnings are always easy; they seem to be more a jumbled chaos of motion, back and forths, more so than actually traveling. Tossing bags in the car, arranging phones, getting water or drinks ready, settling in with this, that or the other. You roll out and the road opens up and you cruise along, dodging traffic and settling down. This trip was no different. We were several hours on and sliding through the south western part of Arkansas before we knew it.

This part of the state is dramatically different than the eastern half, that which you see when you come from Memphis. The flat croplands, so often inundated with standing water give way to a broad belt of forests, with a healthy dose of both pine (loblolly I think) and hardwoods (mostly oak, but a little hickory, sycamore and the like). Western Arkansas is one huge forest with some crop land and grazing acreage throughout. Its rich in deer, boar and all manner of small game. It is amazing how much of the state seems to be slipping back to a primordial time.

This carries on into eastern Texas. You cross the border at Texarcana, and cut into the ever-flattening countryside. These rolling plains of east Texas are a wonder to behold. Gentle hills that rise in slow motions and level out equally as slowly. All green with deep earth, all covered in a haberdashery of trees in pockets and clusters for the forests here have given way to more open space. I like this part of the world. It seems very calm. It seems worthwhile.

I must confess, I prefer the flat open land to hills, mountains and forests. I want to see the sky merge with the earth in some indecipherable moment.

Even as the land flattened out, Dallas loomed into view. This monstrous city sprawls for miles in every direction. We passed down 635 heading to Interstate 20, hoping to bypass the whole mess. It was not to be, as we were soon snarled in traffic that slowed us to a crawl. It reminded me of New York, or New York City, I should say, in that exaggerated southern accent Hollywood enjoys so much. We passed through the edge of the Big Apple not long ago and got snarled in traffic there as well. In both cities, seemingly endless lines of traffic moving with deliberate purpose in both directions and others besides. Dallas and New York City are a bit too crowded for my taste. 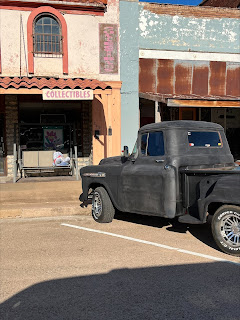 Passing out of Dallas we hit the Great Plains, the southern extent of them. Here the land changed, the verdant greens gives way to reddish brown soil and smaller trees, bluffs that rise up from the plain and washes that cut it away. Cottonwoods abound, at least I think they are cottonwoods, smaller trees that grow in the drier clime. These are the trees the buffalo ate during long winter months, or the bark from them leastwise.

Here the sky really opens up and the horizon seems without limit. Clouds in layers pass overhead and the blue sky seems bluer somehow, contrasted perhaps with the rusty, dry dirt. We passed by more windmill farms. I’m no fan of these things. Though I understand the discussion, they break that wonderful horizon, creating a forest of twirling, lazy arms. If I’m to enjoy man made artifacts, I far prefer the pumpjacks, that are everywhere here, many sitting still, but as many slowing rotating their apparatus to pump oil form the earth. Their motion, languid and constant, pleases my mind for some unknown reason. Maybe it’s the smooth, effortless motion, that teases us with the promise of an easier way.

By this time, 8 hours in, we were getting pretty hungry and the beginning was long washed from our minds and the drive become a little onerous. We scouted up a place to eat called Circa 1880, a hole in the wall restaurant in Baird, Texas. An old town with a long main street with covered walks and a host of abandoned store fronts, each with their own unique architecture. An old train station with caboose added to the town that felt as American as Rural Retreat (see entries on previous trip). It was America once again. We plopped down in the dining hall and I ordered a cheeseburger and Kat and Wilson some chicken, fried pickles and cheese rolls or some such. We ate like starving people and I must say that burger’s meat melted in my mouth. It was delicious. No Tatum, but easily a match for the Main Street Tavern up in Ohio (again see posts on previous trips). 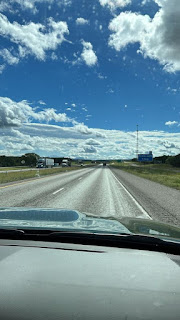 Once again, I was struck by how much people were just going about their lives, enjoying their food and work and families, not so concerned with the fall of mankind that the news seems to be plastering on their billboards every day.

We posed in front of a giant Drink Dr Pepper sign and soon after hit the road, pushing for Midland, about a hundred miles further on, and some much needed rest. Kat found us a Fairfield Inn and booked us a room for the night. I love not knowing where I’m going to sleep each night.

To the north the sky darkened, threatening to blot out the setting sun. Sheets of rain began to fall, far in the distance, hazy curtains of gray that dimmed the fading light. Lightening forked down from time to time, or scattered through the dense clouds above to freeze for a second like some child, caught unawares whose extremities freeze and eyes bulge wide before they unleash the fear and flee in frantic haste to nowhere.

Even as we settled into the room, the storm unleashed. Massive winds buffet the tree outside the window and rain comes down in waves. I’ve always loved the rain and storms. It cleanses the day of its toil and promises a new tomorrow.