From Old Mexico to Heaven's Dust and Back Again Pt 3

Be sure to read part 1 Off to Fort Davis and Texas and 2, Dry Sands, Industry and Old Mexico, below.

As stark and beautiful as the Guadalupe Mountains were, time began to press, so loading up we headed north to the Observatory. We stopped for a chat with some bored park rangers, bought some snacks and then continued on. Up 18 and through the deeper mountains our path led, heading first to Alpine and then Fort Davis. We passed massive ranches, huge spreads of thousands of acres but saw only a smattering of cows. Small herds of a dozen or more. It was strange country for cattle, coming from Arkansas which is lush and green this time of year, and a few acres offers enough forage for herds of cattle larger than any we saw. But the fences slide along the highway, following its every twist and turn and ranches clearly marked with symbols and words, offered no answer to the mystery. 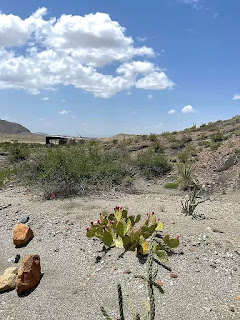 As I marveled at the ranches and wondered how they cut a living from the dry earth, we began passing small homesteads. Dozens, scores of tiny homes nestled in the desert mountains. Some were sheds with extended roofs, others small barn like houses, but all were homes. Each sat on an acre or more with little else to offer for shade or shelter. This kept my mind occupied as I pondered how they lived this far from water. It seemed too dry for ground water, and no tree or brush lines marked the path of river or stream. Upon closer inspection I realized they had large holding tanks, huge plastic affairs, attached to piping from their gutters and metal roofs, catching rain water. These cisterns made it possible to live here in the desert, made it easier – if one allows oneself such a word in this part of the world. But still I wondered why out here? Why so far from anywhere?

But we all know the answer to that.

That mystery, that was no real mystery, lay unresolved in my mind as we lumbered into Alpine and continued up to Fort Davis. The road, 118 now, pushed on up into the Davis Mountains until it unlocked in the small, sleepy town of Fort Davis, nested at the feet of a high bluff of daunted cliffs. We arrived about 3 or 4 in the afternoon and settled in the Limpia Hotel, an old building that housed out of towners since the 1920s. It was very cool, with an old-world taste. Two stories, ancient floors and a creaking stair case covered in thin carpet. A friendly staff  checked us in and we tumbled into the room, somewhat road sore. 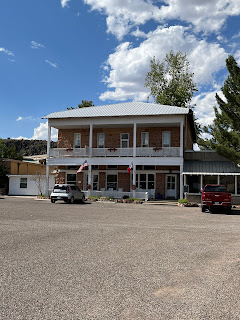 Kathy took a nap and Wilson and I took an hour to wander about. We hit old Fort Davis, a fort built in the post-Civil War days that housed troopers of the Ninth US Cavalry, the famed Buffalo Soldiers. These soldiers joined in the latest round of wars with the Apache nations, a people that included the very famous Geronimo of the Bedonkohe band (though his fight was further west in Arizona, New Mexico, and Old Mexico). Originally founded in the 1850s, abandoned and then reoccupied and adorned with new barrack, mess hall, officers’ quarters and houses for the locals who worked the post. Those remain today, a standing testament to a time long past that an ever-growing minority of people even cast a wayward thought toward.

We wrapped this up with gigantic ice cream cones at a little ice cream shop inside an old train caboose. As we ate, we drove around and soaked in the architecture of the town and mused on all the history. For some reason, I cannot say why, I felt I was at the end of the world. That if we crossed through town and over the mountains to the west that there, upon the summit, would be the end of all things and just a Void laid out before me. It was comforting, that feeling of the finite.

After resting some and eating dinner we packed up and headed for the midnight viewing and star watching at the McDonald Observatory, the target of our journey. We had booked a spot on the 36-inch telescope and were anxious to get up and see the heavens. The clouds threatened us for quite a while and gave us some worry, but by the time the shuttle driver showed up and took us up the mountain the skies opened and all the heavens hung above us.

They rank that observatory and hill as one of the greatest dark sky areas in the country and it shows. You can see beyond forever up there. A blanket of sparkling dots of light, smudges of star systems and galaxies and whatever else crowds the night sky. The viewing in the telescope was wilding, we saw a galaxy, or was it two, some nebula and other objects that threw their light at us so long ago. It occurred to my turgid mind that even if we could go there, to one of these distant stars, it may well be to find it snuffed out, for knowledge of it came to us so long ago. For the briefest moment I toyed with the distances between points of light in our own galaxy and trouble in traveling to them, but what doubts I had about ’47 faded in a series of mental gymnastics that would no doubt meet the half lidded, approving nods of my primeval ancestors that first mused on the stars in the wilds of Hardar and the Tugen Hills. 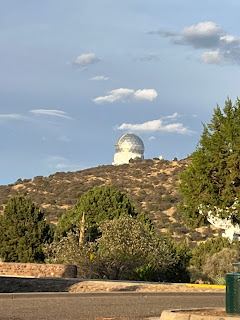 Note: apparently dark sky is becoming harder and harder to attain as cities and people leave their lights on all the time. Give the heavens a break and turn the porch light out.

Bad news hit us during the viewing as the telescope went offline and cut the star gazing with bionic eyes a little short. No matter, we gathered outside the dome and watched the stars and the night sky for an hour or more. The astronomer answered our questions and pointed out constellations that I only just barely began to make out. The expanse was comforting. Its limitless so great that the mind wrestles it into a manageable size. We could see the dark smudges of the Milky Way, like a painter whose sleeve brushed across the canvas. It was wild and a sight I had never seen before.

After a while, about 1 A.M. or so, we made our way down the mountain and everyone scattered to home but the three of us. The astronomer that dropped us off warned us of a bear in the area and we promised to keep an eye out. Kathy hikes in Montana every year and the knocked over trash cans were a clear sign to her that we were not alone.  No matter, we pulled Wilson’s telescope out and set it up in the very dark night and began casting out at celestial objects. We were not there long however, and he had just set up his camera to take pictures of some cluster, when we heard a ruckus up at the completely dark visitor center. A metal can bouncing on brick or concrete. No wind to speak of and not a human in a quarter mile. The bear no doubt. Not desiring to contest the evening’s tranquility with a young or old black bear, we loaded up in the truck and bugged out.

We set up again later, in Fort Davis, about 2 or so and watched for a bit, but fatigue was settling in. We’d been up since 7 in the morning and crossed wild deserts, lonely mountains, meandering rivers and all the weird human that lies between. We at last packed it in and headed back to the hotel and cast weary heads on small pillows and rushed off to sleep.

The return trip was quick and uneventful. We tracked up through the Davis Mountains, through small, quiet rancher towns, broad desert valleys, on and out to the northern plains and the oil industry that I am now convinced is run by some AI located in some far of nebulous web portal. There we picked up 20 east bound and raced for home. Kathy had it in her mind to stay somewhere along the way, and return on Monday. But Wilson and I voted her down so off we raced, determined to complete the 12 hour drive in one sitting, which we did, crossing the border into Arkansas in a huff or rain. She called me “Barn Spoiled”, a name I proudly wear, for as much as I have enjoy these meanderings (and there are more to come, up next is MUFON symposium in July), I love my comfortable home where my reading chair and tv couch invite propped up feet and Dr. Pepper, properly chilled. 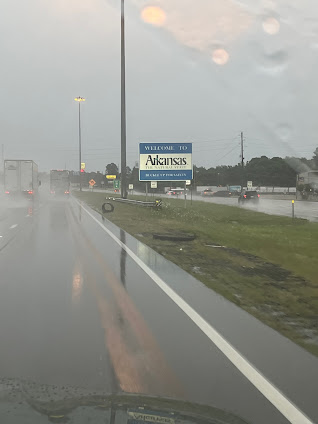