Time and memory are not equal partners. The former begins where you are now, stretching as far in front of you as you can see and beyond, even beyond your mind's eye. The latter fixes itself to the former, trying to hold on to moments that no longer are and can never be again. Memory tries to recreate time and it does it imperfectly.

Years ago Davis and I started playing Dungeons and Dragons, using the small brown books though I have only the vaguest memory of them. We sat on the floor of our shared room (I had a trundle bed, that rolled under his), and played out scenarios. They were almost all combat in those early days. Go into a room and fight something and mostly die. We didn't have screens or even a table. He made the characters on little sheets of paper and gave them to me. It wasn't until later that I made my own. I would barrel to whatever he had ready.

This never became an obsession with me. I played with lots of toys in those days. GI Joes, Apache Mountain, farm animals, matchbox cars (I had no time for hot wheels), read comic books and was reading Tarzan and John Carter novels. I had a gang of knuckleheads ... lets see, Jimmy, Chad, Christy, Lizette, Marco, Teresa and a few others that have faded from memory ... that I ran with. D&D was just another thing to do. Though it did push out the wargames. Davis and I had been playing Avalon Hill games and D&D seemed to me much quicker to set up.

A quick aside: we always flipped my mattress off the trundle bed and set the war games up on the springs of my bed. I don't know where I slept during these games, probably on the floor.

But Davis, who had a paper route and more money than me, was forever buying things. Comics, games and as D&D unfolded, D&D stuff. We went to some really hole in the wall, basement type comic book shops where he bought weird and rare stuff. I have boxes of it, tattered copies of old books and games he bought and used in the woebegone days of the 1970s.

That's how we ended up with two books that skyrocketed to the top of my favorite list, so much so that when I see them these days I'm a bit overwhelmed with an unanchored nostalgia, related to some mostly forgotten memory that clings to the shreds of yesterme: The Dwarven Glory and The Misty Isles.

Both of these books were put out by Wee Warriors Productions. We knew nothing about them and didn't care, they looked just like D&D books so far as we were concerned. They are small, digest sized, saddle stitched with detached fold out maps. They are printed on a parchment type cover stock, brown with black and white covers. The content and production were very raw, good for those days, but the art was something else. The art on these two books is amazing, detailed, equipment and armor and people doing normal but extraordinary things. They are depicted as I saw these fantasy characters, not with grandiose armors and massive weapons hurling themselves through space, but rather as people on the road to adventure with all the encumbrances that requires: armor, pouches and belts, staves and ropes, shields and scabbards. The detail is amazing. 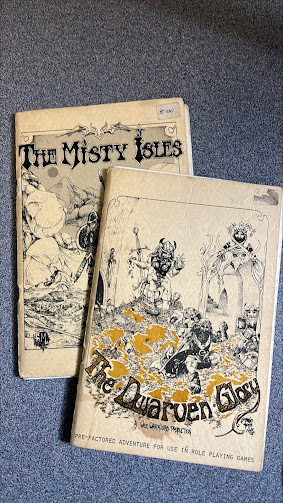 These came to us before the AD&D books I believe. I'm not going to swear to that as memory and all that, but that is what I think. It was sort of the wild west of gaming, we had very little idea of what we were doing or supposed to do. It was all new, on par with skate boards and bell bottoms.

I vaguely remember playing in The Dwarven Glory. I remember something about a really long tunnel with rooms, but more than that I remember the dwarves on the front. This amazingly beautifully articulated scene of three dwarves enjoying the spoils of adventure. There they sit with their mismatched gear, atop a mountain of gold and treasure, in their armor and with weapons drinking from tankards! This captivated me. I stared at this art for hours, soaking in the small details and living the lives of these three dwarves. I'm fairly certain it is what instilled in me a love for dwarves, which I still carry in every game I run or play. It gave them a personality all their own. A love of treasure, but one possessed not of greed. They were not comedic, but were filled with mirth. They were strong, but not dour. The perfect combo. And if you look at dwarves today, in my own world of Aihrde, you cannot help but see these three dwarves, if it pleases you.

The Misty Isles is different. I remember it more. Traveling between islands encountering weird and wild stuff. This is where Kain first entered the fray. Kain the Godless was his eventual name. But at first level he was just Kain. He started way back then, adventuring on the floor of our room. There was no world yet, that was forming for Davis, just adventures and scenarios. Kain plundered the isles. What epic battles I fought and won or lost I cannot say, but I do remember taking a machine pistol off of one dead dude, and three bullets.

Gaming in the '70s was wild and untethered to preconceived notions, so the gun made as much sense as a fire ball. These were in the high days of Ralph Bakshi and his movie Wizards was on everyone's mind. Fantasy had not completely left the genre of sci fi, and it was all just a bundle of 'what ifs." Its hard to explain those days. There was no real genre marketing, Tolkien was only just being rediscovered, and the lines were wonderfully blurred and anything went. Just watch Wizards, and you'll get an idea of what I'm on about. 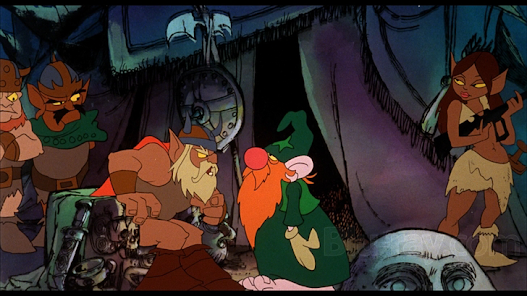 Notice the elf with a rifle.

Aside: Kain was my favorite and highest level character. He made it to 18th level the last time Davis and I played. He was chaotic evil, a fighter and carried a +5 vorporal blade in the end. I loved that guy and all the mayhem he caused to Davis' scribbled notes.

The Wee Warrior stuff is rough, patched together dungeons that have only the vaguest back story and content but more than enough to start plundering those misty isles for dwarven and other glory. The company did not survive however. AD&D started releasing about this time and Davis scooped up the books as they came out, as everyone did, and the game changed and moved on. Davis began developing his own dungeons and scenarios and eventually world and the battered copies of The Dwarven Glory and The Misty Isles got tossed in a box and sat there for decades. But the memory of them remains with me still and conjures the shades of past glories where I conquered alone and plundered as desired - lost now to all but a remembrance that desperately seeks to hold time in place.

Post Script: In later years, Kain ran afoul of a god from the Deities and Demigods from TSR. It was none other than Arioch (Davis's copy had the Melibonean gods in it). I remember this particular encounter very well. He was my patron, but being far less couth than Elric, I mouthed off at him. I could see another death in Davis' eyes so I pulled out my secret weapon, stolen so long ago and hidden in the meandered scribbles of my character sheet: my machine pistol and three bullets. I opened up on Aricho, firing a burst of three bullets at the Knight of the Sword. It gets blurry after that, my memory, but I do know I had to resurrect Kain in the next session.