Dry Sands, Industry and the Road to Old Mexico Pt 2

Be sure to read part 1 Off to Fort Davis and Texas and 3, From Old Mexico to Heaven's Dust and Back Again, below.

The second day of the journey to the McDonald Observatory begins in west Texas, at Midland where my wife, youngest and I gathered our gear and hit I20 west. Though headed for Fort Davis, we decided on a small detour so hit the road around 8 am headed down Mexico way. This day would not end until about 2-3 am, so I will split it into two, as there was so much we saw and did.

It took us a little longer to resupply than expected. Wilson developed a bit of a cold and we needed some mess from the grocery, ice and coffee and the like. Once secured, we scooped up some cheap breakfast at a fast-food joint and ate in the car as we ambled out onto the interstate. We skirted Midland and headed west, passed Odessa and cut south on small Highway 1053. 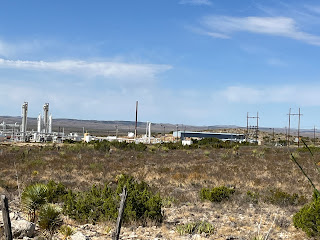 Midland is an oil town, or so I gathered as we lumbered through it. Everywhere you look there are signs of the industry that drives the entire world. It beggars the imagination. At first your mind begins to take in the pump jacks and electrical poles everywhere, then the collecting tanks, then processing plants, refineries, and the trucks. The trucks constantly moving, hauling gear, huge generators, giant iron boxes called “sandboxes”, mining blades, other vehicles, module offices or homes or whatever those large pods were. All this trucked to industrial complexes spread out over scores of miles. There are small cities too, trailers everywhere. Sometimes a few out in the desert in a fenced lot, at other times scores of them in rows and lines. Long distances lie between some stations, a dozen miles or more of empty desert, and as your mind begins to absorb one, out springs another from the desert hills. One crowds the other with jarring imagery, blurring what was with what is and jumbling the whole epic scene. In many ways its small, all this work and industry, tiny against the vast desert and never ending sky. But too it is immense. The work of men, creating a world all its own that feeds the rest of all of us with the energy we all need. Men, dwarfed by the jumbled world of pipes and valves, towering stacks, tanks of all sizes and metal, metal, and more metal. It beggars the imagination. 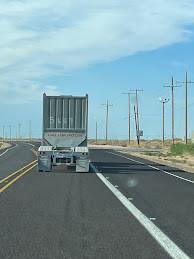 Mixed in with all this were the vast windmill farms. Huge, towering structures, holding the horizon in check, pinning the earth to the sky with slow spinning blades so large that they seem unreal.

It was like something out of science fiction story. All we need now are huge harvesters, rolling slowly across the plains…but that lies in Kansas and my next trip to the MUFON Symposium.

1053 rolled south for many miles until we seemed to leave the oil and gas lands and the country became broken desert. Rolling dunes of sand covered by brush and grasses with occasionally, an old adobe house, long abandoned and in ruins, standing as a reminder that once someone tried to cut a life from this harsh world. Buttes began to loom in the distance, whispering promises of the mountains to come. We passed through Fort Stockton, heading for Big Bend National Forest. Kathy wanted to see it and it seemed a good way to kill the hours before the trek to the observatory.

We arrived in the park in the off season. Most of it is closed this time of year. Too hot I suppose. We paid the fee and followed the road down to Panther Junction and then cut off on a small, winding park road that took us deep into the Guadalupe Mountains. We got it in our mind we wanted to see the Rio Grande. It only made sense, weeks before we had headed to Niagara and the Atlantic. The Rio seemed a logical destination. 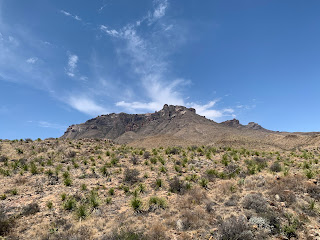 The mountains here are astounding. They crawled up slowly from the plains north, buttes creeping up on the left and right, the road snaking up grades barely noticeable into plateaus of dry dust, dirt, and rock. The deep, dark earth of southern Arkansas had given way to the red soil of central Texas and now the red soil gave way to dry yellows and browns, hot and baked. Cacti abound here and other hardy grasses and a few shrubs. Hills of jumbled, fractured rock rose all around, some so twisted it looked like the hardened clay of a mad giant’s handiwork. The air matched the soil, and the heat promised more in July and August. I have read a small mountain of books on the early Apache, their way of life and their wars with the Mexicans, Spanish and Americans. They lived and fought from and in these and other mountains like them further west. I could not help but dwell upon the hard life it was and the power of that people then and now. If I closed my eyes I could just him, squatting in the broken rocks of a low bluff, in his breechcloth and long-legged boot like moccasins, the sun beating down on him, wondering what strange vehicle passed through his country.

We at last came to the Rio Grande Village and Campground, but drove on to the Nature Trail in the camp ground itself. We wanted to see this river more than ever for some odd reason so cut up the trail. In short order we stood upon a small bluff at the foot of a larger one, looking at the small, winding Rio Grande and beyond its banks, old Mexico. It was beautiful. And right out of any number of westerns. 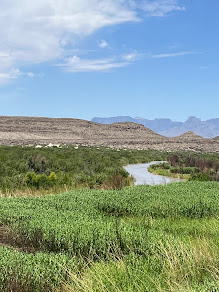 Note: I like to say Old Mexico, because in the movie Young Guns, Billy was always saying it and it makes it sound more romantic in the playground of my mind.

The valley we were in, or whatever it was, was immense, with towering hills all around us. It is a hard country here, one I think that it would be difficult to etch a living out of, even if you were raised in it. On the other hand, the towering bluffs, with cliffs of jumbled rock, the scorching sun and wind blasted soil would keep most interlopers out and make for a peaceful living.

Its well worth seeing if you find yourself meandering the southern plains of Texas or northern plains of Old Mexico. An empty country filled with mountains, sky and wind blasted plains.

Be sure to Check out Part 2