Word of the Day -- Defenestration

Now we come to a word that I truly love.  Not only for the specificity of it, but for the way it sounds and how it has roots in Latin but carried over to many languages, including French and Spanish.  I first came across this word about 30 years ago when I was putting in a french drain to carry water away from my house.  I had bought a house, painted the walls in the finished basement and was quite happy with them.  Then the rain came.  And keep coming.  It overflowed the lawn and then overflowed the half moon well windows in front of the house and when I went downstairs it looked as if my walls had come to life.  The water had somehow seeped in behind the paint and was being held in place by the paint.  It looked like a monster out of M&T.  Not knowing what else to do, I punctured the paint and well, you can guess waht happened, water was all over the floor.  Luckily I had a sump pump but I knew I had to fix it.

A french drain is basically a gradually descending trench that will take ground water away.  You did and then you can do a couple things.  I was talking to my neighbor and he said I needed a fenestrated pipe.  Not wanting to look like a fool (this was my first house and I was young) I said of course, a fenestrated pipe.  Sure thing.

After he left I called up the hardware store in Rockport and asked if they had any fenestrated pipe.  They said they did, so instead of asking what it was I went down there and asked them where it was.  And lo and behold, there was a fenestrated pipe.  It's a pipe with holes all over it.  it allows for water to trickle down in it and to help it move along as well without seeping right in.

Finally I called up my father and asked him about the word.  I still hadn't unpacked my books, that's how new the house was.  Turns out fenestration means, in the most general terms, windows or holes in a building or other object.  Such a big word for such a simple thing.  My father, who was a wordsmith on par with anyone I knew said: "You know what defenestration is?" And he proceeded to tell me:

Defenestration -- the act of throwing a person or thing out a window. 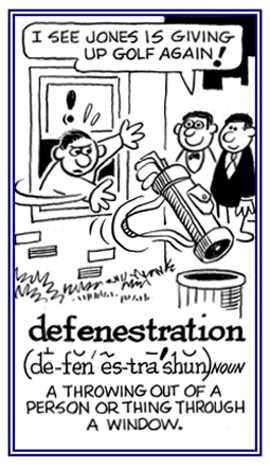 Zach said…
It's a good word.
The beginning of open revolt in the Thirty Years War is the Defenestration of Prague, when some Bohemian nobles threw Emperor Ferdinand's representatives out of a window at Prague Castle.
10:41 AM

Troll Lord Games said…
I saw that in my research and I was going to get into that but then my story got so long I figured I better wrap it up. LOL
11:06 AM