My own Battle Royal, Cleaver the Pit 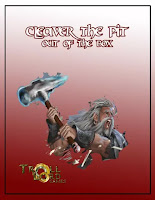 For those of you who have been with Troll Lord Games for a long time, you have probably heard of Cleaver the Pit (Link). It is my baby. It is not a role playing but a fighting game. Everyone rolls up quick ‘characters’ and then they are pitted against one another in an arena. The motto is, “six enter, one shall live.”

In an exciting turn of events, Cleaver the Pit may just be back on the drawing board and see some development in the future. I have to wait and see the title come up on the whiteboard though. The whiteboard is where Steve lists works in progress and planning. I don’t think its up yet. Come to think of it, I have not even seen the white board in a long time and do not even know if it exists.

It doesn't! Some map of The World of Aihrde.

Cleaver was developed as a pregame game we used to play. I threw it together one night while waiting for all the other players to show up. As a quick pit fighting game it became super popular with my fellow gamers. Occasionally we even played that in lieu of Dungeons and Dragons and later Castle and Crusades. It was a way of getting the excitement of combat without having to lose a Player Character. It developed over time and became fairly complex.

We published its nascent and basic rulings. Not sure if anyone plays it anymore. The game works best with 4-6 people, each of whom is engaged in slaughtering their fellow players. There are also tactical rules, cards, and weird combinations of dice. Not to mention the main dice is 30 sided. And lots of dying. Remember, six enter but only one can live.

So cleaver is entering design phase three. Yuppers. Design phase three. So any of you out there interested in Cleaver the Pit, its coming back in a whole new format and maybe some new baseline rules. We’ll see.

First I have to see it on that whiteboard, wherever that is. 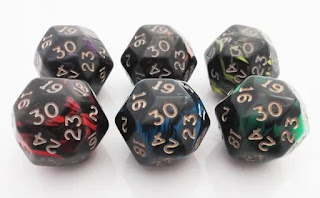