Mythical Beasts and Legends of Lore

The Aetolean Boar (more commonly known as the Calydoniain Boar) is on the chopping block. This boar bore a borehole in my head and I suddenly saw how we bore a boar into a boring boar. (4)  in short, the Aetolean Boar was created by Artemis to enact revenge against King Oeneus who did not do his due diligence in worship. (5) Artemis wanted revenge. (6) So Artemis created the Aetolean Boar to wreak havoc on the land’s of Oeneus. This caused a gathering of heroes to slay it. After it was slain a fight arose causing the death of Meleagar (Oeneus’ son and one of the two who slew the boar) and many others (7). Thus, Artemis’ revenge was complete (let’s just say justice for the affront of not making proper service to the Artemis).

I do suggest everyone read about the Caydonian Hunt. I can’t find a really good telling of all its aspects but this link should provide a start. (8)

Here is Ovid’s description of the boar. (9)

This looks perfect on the screen so not sure how to fix it - also i am bored, so plow through it.

So where exactly does this leave us. Right now, the Aetolean Boar is a more or less rare wandering monster and fairly powerful. It is in the Castles and Crusades Monsters and Treasures Book, currently available here. (10)  It will be removed and moved to the Monster of Legend book. (11) There, it will be given much greater powers like 300 hit points, a +30 BtH, AC of 30, and can shoot lightning at will.

The old boar will remain in the Castles and Crusades Monsters and Treasures Book which can be used with the Players Handbook and accessorized with Castle Keeper’s Guide (HAHAHAHAHAHA). There, the boar will get a new write up, ranging in power and kind. This here sucker is 1500 pounds and six feet at the shoulder. 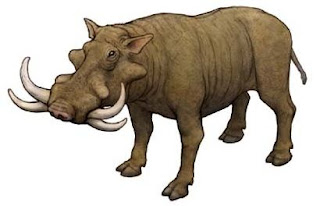 1: Holy cow did I go on a twisty path with the word Nigh. I have been using the word for ages and ages – being of an apocalyptic bent – and decided this morning of all morning to look up the word’s origins. I started here and ended here (Source: Oh Boredom I suppose. Anyway, you find out so many interesting things just by tracking down your own Aetolean Boar.)

2: A cool place to start looking up a word’s etymology is here.

3: Every time I use the command thingy tense, it is not a command it is just an attention-grabbing tense. But if you don’t follow it, I will place you in an Iron Maiden.

4: Did you know a ‘bore’ is a type of wave. I don’t know how bear and bear got two different meanings but bore, as the past tense of bear, should have something to with a wave bearing things. Like a wave bears a ship ashore. But alas, it does not. It is just the mispronounced or repronounce word beahren. It likely originated with some drunken pub crawlers. (Source: places and places. I am too bored, not to be confused with lazy, to gather the links. The drunk part is my theory though. I bet it holds more water than most.)

5: It come to mind that the Greeks were really poor at following the rituals and sacrifices demanded by the gods. They needed a Ritual OSHA of some sort, a ROSHA I suppose.

6: It occurred to me that many may not be immersed in Greek mythology or only have a cursory relationship with it. Most mythologies are fascinating by any measure. Greek mythology is fascinating by double measure because it informs so much of Western ideologies. Reading up on them is well worth any effort (as it I with almost any mythology) but especially so because we are still dimly reflecting its mores and measures. I don’t know where one would start; The Library of Greek Mythology, I guess.

7: As a result of a disagreement over the spoils of victory a war between the Aetolians and the Curetes erupted. Makes one wonder if two kingdoms did go to war over a pig. Maybe not but stranger things have happened such as the great Soccer War between Honduras and El Salvador. TrueStory.

8: If you do read up on the Calydonian Hunt, pay attention to Atalanta as it was Meleagar’s love for her that started the whole fight for spoils. Love for a woman sure does play a prominent role in Greek warfare.

9: I stole that from Wikipedia – who stole it from Ovid.

10: Steve told me that my pay comes out of sales. So he asked, why do you never promote our products, especially those you write. To which I responded’ “did you know field lettuce is good for you?” I have to start shilling our product line. Now, I say shilling because I feel like a carnival barker whenever I try to sell something. But, to ensure I still receive some pay, I will shill away. You can even buy this boxed set if you are so inclined. Inzae. 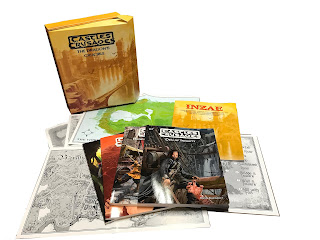 11: I don’t know if this is announced yet. I don’t even know if it has a title. I don’t really pay much attention in staff meetings.