Word of the Day -- Halberd

This is a word that comes up frequently in our RPG conversations.  Though I don't own one, I think I would like to use a:

Halberd -- a weapon especially of the 15th and 16th centuries consisting typically of a battle-ax and pike mounted on a handle about six feet long.

A weapon that consists of an ax blade and a sharp spike mounted on the end of a staff, usually about 5–6 ft (1.5–2 m) long, a halberd was an important weapon in middle Europe in the 15th and early 16th centuries. It enabled a foot soldier to contend with an armored man riding on horseback; the spiked head kept the rider at a distance, and the ax blade could strike a heavy cleaving blow. Firearms and the declining use of armor made the halberd obsolete. 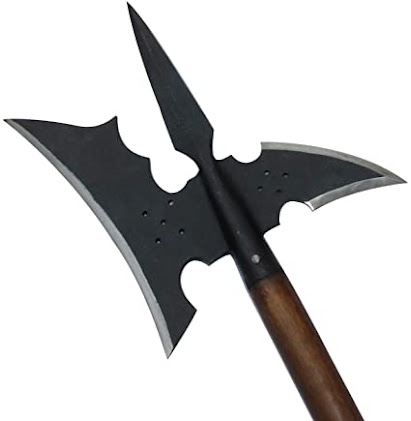