Fighters need food.  Not just a bite, but a hearty meal.  Nothing says hearty like this grill full of food... 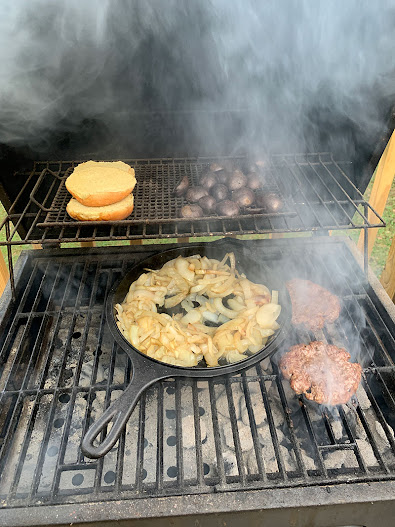 I had grilled some bell and poblano peppers and removed those for steaming off the skins before I remembered to take a picture.  But what you have here are onions caramelizing in a cast iron skillet, some purple potatoes, and some buns staying warm for the burgers.

I usually eat turkey burgers (blasphemy, I know, Steve, but what can I say?) but these were fun to try as it is a combination of brisket, chuck, and short rib I found.  After watching a couple videos from chef J. Kenzie Lopez-Alt I decided to make them like he does:

Loosely form the patty, don't bunch it together hard and don't salt it until you are putting it on the grill.  Most important, form it into a type of disc, where the middle is thinner than the outside.  That helps with an even cook and gets rid of the puffy middle burgers can sometimes take on.  Oh, and make the burger slightly bigger than the bun you are going to use.  In this case, they are store bought potato buns, but if you have time, make some sourdough buns.  Last time Mac was up, we made some killer buns for the pork shoulder bbq  (tip: eat homemade buns day of or freeze).

The onions are vidalia, thinly sliced with a touch of salt and baking soda.  Again, no finished pic on them but there were damned good.

The purple potatoes were good, a little less starchy than others and I did start them in the microwave for 3 mins prior to putting on the grill.

Bonus: The next morning the leftover potatoes and onions made a killer hash to go along with scrambled eggs, which will be in another post down the line.  Mac and I each made our version of perfect scrambled eggs one morning; I need to see if I can find a side by side pic somewhere buried in a phone.

All in all a meal fit for a Fighter!