Word of the Day -- Embrasure

In military architecture, an embrasure is the opening in a crenellation or battlement between the two raised solid portions or merlons, sometimes called a crenel or crenelle. In domestic architecture this refers to the outward splay of a window or arrow slit on the inside.

A loophole, arrow loop or arrow slit passes through a solid wall and was originally for use by archers. The purpose of embrasures is to allow weapons to be fired out from the fortification while the firer remains under cover. The splay of the wall on the inside provides room for the soldier and his equipment, and allows them to get as close to the wall face and arrow slit itself as possible. Excellent examples of deep embrasures with arrow slits are to be seen at Aigues-Mortes and Château de Coucy, both in France. 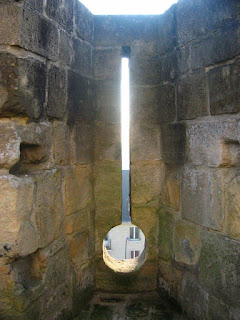