Posted by Troll Lord on December 03, 2015
Here are some folks building and selling tiny hobbit homes. 400 square feet of living under a hill or rise, all assembled in chunks and shipped to you to put where ever you want...grass not included. Clearly you are going to need a back hoe to get this sucker buried, or you can just get a shovel and dig the hole, but that might take longer than some expect. 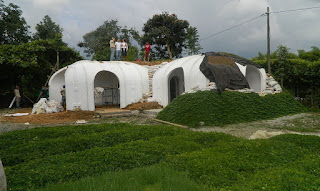 That's not much space for this old Troll. I'm more like Bilbo I think, lots of space, lots of rooms, but only, with less clutter (he had too many things in his house). But a nice sprawling world under the ground, well lit, snug, comfortable and cozy, with plenty of windows and skylights. That would be a nice ticket to a nice home. Though in truth I've never been sold on the round doors, though I like circles they are more relaxing than squares and rectangles, which just seem judgmental somehow . . . "do your work now!" said the square.

Yeah, I could go for this!