Posted by Troll Lord on December 07, 2015
Some years ago Davis, my brother, used to buy Heavy Metal Magazine. I read it from cover to cover...well most of the times. This was back in the late 70s and early 80s. Alot of the stuff was really new for me. Movies of the day were poor at best, with bad special affects (minus only a very few, like Star Wars and Blade Runner) so magazines like HM were really the best place to get your science fiction/fantasy fix in full color. HM knew no bounds too, lots of titillating stuff in there, rolled up in good stories.

Later issues, in the late 80s and 90s seemed to force issues on the reader. It was no longer a "new concept" but rather an old one being driven home with more force and less subtly, no longer ground breaking, but more ground pounding.

I wandered over to their website this weekend to see what they had going on. Issue 277 is jut out and looks pretty good. Movies and tv shows of course supply the bulk of my fix now, but it even those are growing to a bit stale. Maybe its time to revisit HM and see what they have to offer.

I think I'll scoop up an issue or two and see what it has. 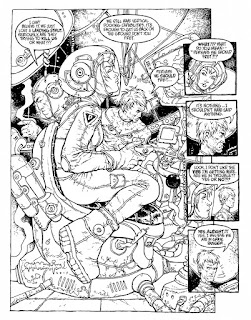