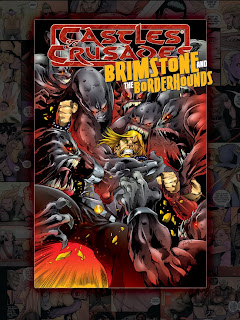 Hell is an unkind place. A sprawling megalopolis of twisted streets and ramshackle buildings piled one on top of the other, clawing their way to height's unseen where the Lords of Hell rule. Here the harvested souls of evil labor as slaves, doomed to eternal torment. Bound to a world of suffering, always yearning for a world beyond their own. Those wicked who are able seek to flee this city of the damned and do so with whatever tool they can: greed, violence, avarice. Fleeing hell is the only goal.


But to do so these souls must pass the Borderhounds. Bounty Hunters set on the edge of forever who hunt down wayward souls and throw them in, or out, of Hell. Led by grim faced Brimstone, these Borderhounds are the bane of the damned.


Now you can join the Borderhounds!

C&C's Brimstone and the Borderhounds will be a complete, standalone Role Playing Game using the tried and true Siege Engine, crafted by veteran game designer Jason Vey. Fight devils, demons and more in your hunt to capture hell's wayward souls!

"The first time I talked to Brim about this property," remarked Steve Chenault, the Troll Lord, "I instantly thought, 'this would make a bad-ass role play gaming.' Limitless possibilities of adventure that drags one through the maelstrom of hells, hunting evil, fighting devils and other baddies. A perfect expansion!"

In 2010, Hound Comics brought together a wide range of talents to bring out their flagship brand, the comic book Brimstone and the Borderhounds. They quickly shot to fame and were picked up by Barnes & Noble, spreading to all 700 outlets. Since then Hound Comics has branched out into a number of different media, releasing more comic book titles, children's books and an animated series (now in development). With all that, RPGs are a natural fit.

"This is extremely exciting. I can't wait to actually play the game," says Brim, CEO of Hound Comics, "I've always wanted to play fantasy role playing games or even the old Marvel and DC role playing games. I owned them; but never knew how to play! Looking forward to learning and having the opportunity to play along with and gain new fans in the world of RPG."

Troll Lord Games, long a veteran of the RPG world, brings its considerable talents and versatile Siege Engine to the table. Veteran author and game designer, Jason Vey, author of Amazing Adventures RPG and a host of books published by Eden Studios, has signed on as lead writer for the Brimstone and the Borderhounds RPGs.